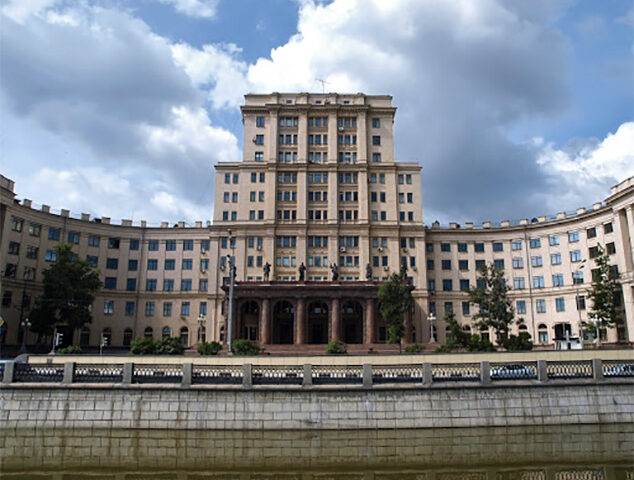 BMSTU has 19 departments providing full-time education. University provides postgraduate and doctorate programs and has two affiliated secondary schools. More than 19,000 students study in BMSTU, and specialties cover all range of modern machine and instrument building. More than 320 doctors of science (Russian degree higher than PhD) and 2000 candidates of science (similar to PhD) teach and do research in BMSTU. Main parts of the University are eight scientific and educational divisions. Each of them consists of scientific and educational branch. Several branch departments also exist, they deal with particular fields of industry. They are based on big factories and organizations, situated in Moscow, Moscow suburbs (Reutov, Krasnogorsk and Korolev) and in Kaluga. BMSTU has unique experience of teaching hearing-impaired students since 1934.

Bauman University is one of the three Russian universities (along with Lomonosov Moscow State University and Saint-Petersburg Polytechnic University) that started in 1926 military education of students. Today military institute carries out training of military officers of 21 specialties. Military specialties are based on civil ones and help to teach high-qualified civil specialists. The institute consists of five military subdepartments (one of them is in Kaluga branch), civil defense subdepartment and military training center. Practical training is carried out in Dmitrov branch, where military hardware is deployed.

All educational and scientific activities of BMSTU are future-oriented. It is taking part in conversion programs, defining priorities of new scientific areas development, developing foundations of government human resources system for high-tech industry.

BMSTU combines precise calculations with engineering intuition, follows traditions of Russian engineering school method, subtly appreciates new fields of activity, carries socioeconomic approach to complex engineering problems and humanist approach to education. All of that allows BMSTU to be on the cutting edge of scientific and engineering progress.

Now strategy of the University is to provide human resources for cutting-edge areas of Russian science and technology, in prior economic development directions of the country, such as: information and communication systems; nanosystems and materials industry; power supply and conservation; biosystems; security and counterterrorism; transportation and aerospace systems; promising military equipment.

Each room in the apartment is equipped with:

Bathroom is shared between double and triple roommates​.

Moscow is the capital of Russia, the largest city in the country and Europe, and one of the largest cities in the world. Moscow refers to global cities having a great influence on the world because of its high economic level and population. It is the main transport hub of Russia, its political, economic, cultural, and scientific center.

Moscow is located in the center of the European part of Russia, between the rivers Oka and Volga. The climate is moderate continental: heavy frosts and extreme heat are rare. The average temperature in January — minus 7.2 degrees Celsius, in July — plus 20.4 degrees Celsius.

The name of the city as well as the names of many other cities around the world, is bound with the name of the river it is standing on (the Moskva River). The river was called this way long before the settlement appeared. It is unknown who named it and what this name means. There are two main versions: Finnio-Ugric and Slavic.

According to the first one, the word “Moskva” is derived from the Finno-Ugric language group which means “river-bear”. The Slavic theory points to the stem “mosk” denoting “marshy” or “moisture, liquid, marshland, dampness”.

The city is surrounded by 6 airports, 9 railway stations, and 3 river ports. Moscow has developed a fabulous metro (subway) system. The first stations were built in 1935.

Moscow is the largest Russian financial center. About half of Russian banks are located in Moscow. Most of the largest companies are registered and have head offices in Moscow, although their manufactures might be located thousands of km from the city.

The city is the most important center of retail sales in Russia. Moscow represents about 30% of all commodities sold in Russia.

Moscow is also a large scientific center. There are a lot of scientific research institutes carrying out research in many branches, such as nuclear power, microelectronics, space exploration and other promising directions.