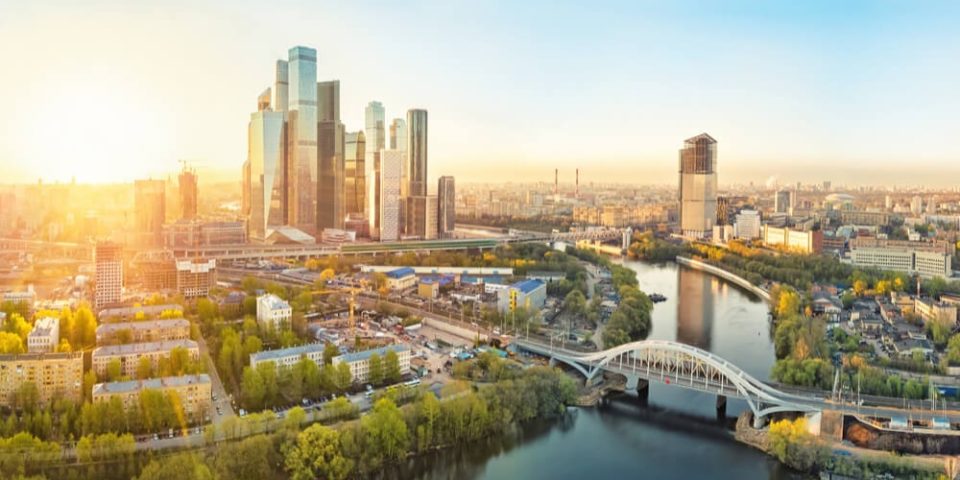 Russia or Russian Federation is a country with great history, home of famous scientists and land of natural beauty.  Moscow is the capital of Russia and Vladimir Putin is the President of Russia ( Russian Federation).
Russia (was formerly known as USSR United State of Soviet Republics) covers area of 17 075 500 km2 which makes Russia the largest country in the world, followed by Canada, China and USA. Russia occupies most of eastern Europe and northern Asia. It stretches from the Baltic Sea in the west to the Pacific Ocean in the east, and from the Arctic Ocean in the north to the Black Sea and the Caucasus in the south. It’s bordered by Norway, Finland, Estonia, Latvia, Belarus, Ukraine, Poland, Lithuania, Georgia, Azerbaijan, Kazakhstan, China and North Korea. Russia’s borders stretch for a total of 58,562 km (with 14,253 km bordering other states and 44,309 km bordering the sea). 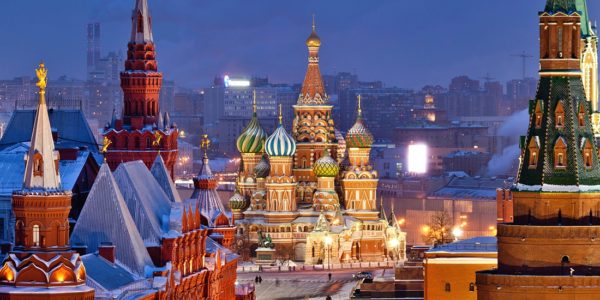 Russia was formed in 882 as a kingdom of selective cities of western Russia including Kiev. That time Kiev was the center of a trade route between Scandinavia and Constantinople, and Kievan Rus. In 989 Vladimir I was the ruler of kingdom who extended to as far south as the Black Sea, the Caucasus Mountains, and the lower reaches of the Volga River. During 1237-1613 Russia was under the influence of Mongol. In 1237 Batu Khan, a grandson of Jenghiz Khan invaded into Kievan Rus. Over the next three years the Mongols destroyed all of the major cities of Kievan Rus’ with the exceptions of Novgorod and Pskov. To regain its honor and land in 1480 Grand Duke Ivan III gathered its strength within in Moscow, that time he was strong enough to faceoff with Mongols but it took him almost half of the century to conquer Mongols and to Russia became a unified state. That time  Ivan IV grandson of Grand Duke Ivan III. In 1547, he adopted the title of tsar. In 1552 he conquered Kazan and Astrakhan in 1556. In 1613 Michael Romanov was elected as Tsar. The Romanov dynasty to ruled the Russia for 304 years, until the Russian Revolution brought an end to the Tsarist state. Since the of Ivan IV, the Russian Tsars had followed a fairly consistent policy of drawing more political power away from the nobility and into their own hands.
By the 19th century Russia had expanded its territory and its power considerably. Its borders extended to Afghanistan and China, and it had acquired extensive territory on the Pacific coast. The foundation of the port cities of Vladivostok and Port Arthur there had opened up profitable avenues for commerce, and the construction of the Trans-Siberian Railway to link the European Russia with its new eastern territories. In 1894 Nicholas II acceded to the throne. In January of 1905, the Japanese attacked, and Russia experienced a series of defeats that dissolved the tenuous support held by Nicholas. Nicholas was forced to grant concessions to the reformers, including most notably a constitution and a parliament, or Duma. The power of the reform movement was founded on a new and powerful force that entered Russian politics. The industrialization of the major western cities and the development of the Batu oil fields had brought together large concentrations of Russian workers, and they soon began to organize into local political councils, or soviets. It was in large part the power of the soviets, united under the Social Democratic party, that had forced Nicholas to accept reforms in 1905. In 1912, the Social Democrats split into two camps—the radical Bolsheviks and the comparatively moderate Menshiviks. by 1920 the Bolsheviks controlled the soviet Russia.
The first few years of Soviet rule were marked by an extraordinary outburst of social and cultural change. Although the Bolsheviks had maintained complete control of the economy during the civil war but by the end of the 1930s, the Soviet Union had become a country in which life was more strictly regulated than ever before. With the outbreak of the Second World War, the Soviet Union found itself unprepared for the conflict. In june 1941 the German army invaded into  Soviet Russia by seizing most of the Soviet territory in the west, surrounded St. Petersburg and  within a few hundred miles of Moscow. In 1942 the Germans launched a new invasion against the southern front in an attempt to gain control of the rail center of Stalingrad on the Volga and the vital Caucasus oil fields. Despite an overwhelming disadvantage in numbers and inferior weaponry, the Russian army succeeded in holding out against the enormous  German army. In November, a relieving force managed to encircle the attackers and compel the surrender of the entire force, marking a decisive turning point in the war. From that point onward, the Russian army remained on the attack. By 1944 they had driven the Germans back to Poland, and on May 2, 1945, wall of Berlin was fallen.
In 1990 Russian Repeblic ended the soviet era and declared its independence.

Most of the area of Russia is located in the temperate belt. The Arctic territories are located in the Arctic and sub-Arctic belts, but at the same time, a small section of the Caucasus Black Sea coast is located in sub-tropical belt. Russia has all the climatic zones except tropical: tundra, forest-tundra, forests, forests-steppes and semi-deserts.
The climate is mostly continental. Most of the country has a so called harsh continental climate characterized by a big difference between summer and winter temperatures (it gets indeed very cold in Siberia during winter, but it is also very hot in the summer). Average January temperatures are from 0 to -5 degrees in the western Russia, but sometimes -40 degrees in other parts. The average July temperatures are from 1 to 25 degrees.
The climate induce an unbalance between different parts of Russian area, so many large parts of country have almost no population and development. Russia has only 8 % of arable land.

The majority of rivers are located in the Arctic Ocean basin (Ob, Irtysh, Yenisei and Lena). The Amur, Anadyr, Penzhina and some other rivers are located in the Pacific Ocean basin and Don, Kuban and Neva flow into the seas bordering the Atlantic Ocean. Russia’s main river, the Volga, flows to the Caspian sea. Generally, Russia has about 3 million km of rivers.
There are many lakes in Russia, fresh- or salt-water. The largest lakes are Caspian, Baikal, Ladoga, Onega and Taimir. Lake Baikal is the largest fresh-water lake in the world, it has maximum depth of 1620 m.
Forest cover about 40 % of the entire Russian territory. The largest forests are in the Siberian taiga, at the eastern part of country and northern part of European territory. The most frequent forest is the coniferous forest. There are also some mixed forest in mid-Russian regions.

Russia has many natural resources including major deposits of oil, coal, natural gas, many strategic minerals, diamonds and timber. The largest oil-and-gas deposits can be found in Western and Eastern Siberia and on SakhalinIsland. The list of Russian mineral deposits includes gold, silver, platinum, cobalt, antimony, zinc, mercury, and many others. Russia abounds in mineral resources whose total potential value (in world prices) is estimated at an impressive $30 trillion.

Russia has the world’s fifth largest population (148,8 million people) after China, India, the United States and Indonesia. Russia is a multiethnic society. The largest ethnic groups include Russians (81.5%), Tatars (3.8%), Ukrainians (3%), Chuvash (1.2%), Bashkir (0.9%), Byelorussians (0.8%), Moldavians (0.7%), etc. Over 80 % of the population name Russian — the official language of the country — as their native. Other languages are used in ethnic minority regions. Russia has equal religious diversity: with the main religions being Russian Orthodox Christianity and Muslim overall over 150 confessions could be found across the country.
All in all, 73 per cent of Russian citizens live in urban areas.
The Russian Federation has 1067 major cities, with 13 of them inhabited by one million and more people each. The largest cities are Moscow, St. Petersburg, Nizhny Novgorod, Novosibirsk and Yekaterinburg. Administratively, the Russian Federation is divided into 21 republic, 6 krays (federal territories), 2 federal cities, 49 regions, 1 autonomous region and 10 autonomous areas.

Russia has over 50,000 state public libraries in total possession of over a billion books. There are about 1500 museums (historical, ethnographic. memorial, of folk crafts, fine and applied arts, theatre, music, natural sciences, technology and many others). Twenty open-air ethnographic museums present folk architecture, arts and everyday life. Today, folk art in Russia survives in two basic forms — handicrafts practiced on a broad scale and works of art created by gifted persons working at home.