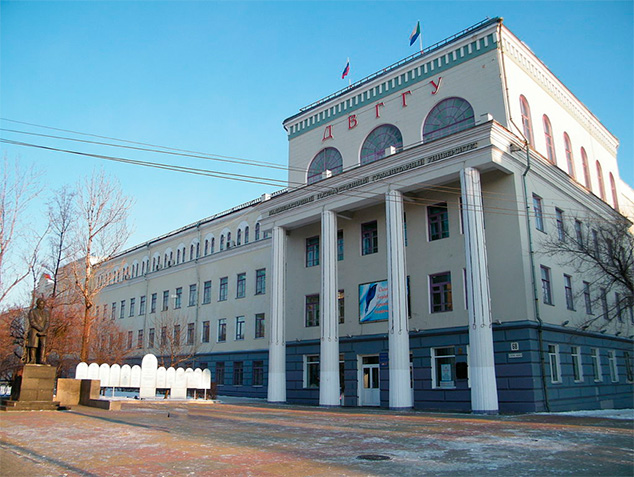 Following the development of the institute and overall faculty growth in 1994, by the decision of Ministry of Education and Science of the Russian Federation the institute was transformed into Pedagogical University. In 2005, following the federal decision it was renamed as Far Eastern State University of Humanities.

Dorms consist of eight rooms per floor, with 2-3 people per room. Each floor also has one kitchen and two toilets, and the basement has a shower. Students cannot select their own rooms. We encourage students to apply early, as the number of rooms are limited. Some students may not be comfortable with dorm rules, as they are often considered strict.

All Dormitories have the following facilities:

Khabarovsk is a city in Russia, the capital of Khabarovsk krai. The city stands on the right bank of the Amur River, on the Middle Amur lowland, about 20 km from the border with China.

The city is a large transportation hub connecting the north and the west of Russia, Primorye, and Sakhalin. The Trans-Siberian Railway goes through it. Khabarovsk is a connecting point of the federal highways Chita-Khabarovsk, Khabarovsk-Vladivostok (M60-Ussuri), Khabarovsk-Komsomolsk-on-Amur and the highway under construction Khabarovsk-Nahodka.

From the high bank of the Amur River, you can see Chinese territory. Khabarovsk Bridge as well as and the cliff and the monument to Muraviev-Amursky are depicted on the Russian note of 5,000 rubles.

You can try dishes from around the world in the restaurants of Khabarovsk: Russian, Ukrainian, Italian, French, Bulgarian, Japanese, Korean, Chinese, Uzbek, Azeri and other cuisines.